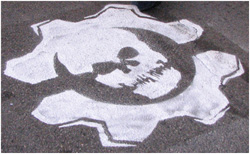 [1]War 3 – which will also have a special Midnight Release event at the Best Buy on Cambie Street. The launch event actually began a number of weeks ago, when gamers were asked to partake in some training demos. In those demos were codes to be deciphered, which resulted in a phone number to be texted and a name to be followed and interacted with on Twitter, which led to more deciphering, which somehow ended up with participants receiving a very unappetizing packet of “Locust Meat” from Save On Meats on East Hastings and a VIP ticket with a QR code. The QR Code led to a web site which revealed the location of The Barge, where the Launch Camp was located. Vancouver was chosen as a Launch Event location due to the strong gamer market in the Lower Mainland.

Daniel, a married father of two who was at the front of the line waiting for the camp to open, had the distin

[2]ction of being the first person to complete the coded challenge. It took him, along with a friend from Newfoundland, 4.5 weeks to unravel all of the clues. He was planning to send his friend the package of Locust Meat as a thank you for his assistance in completing the puzzles. Others found out about the launch event through email invitations or an ad on the Xbox 360 Dashboard. All attendees were rewarded with a Gears of War 3 bandana, the VIP puzzle solvers were also given t-shirts.

When the camp opened shortly after 6pm, there was a line of at least 200 people waiting to get in – and it was a very slow moving line with only groups of five being let through the gate at a time. Understandably this made it easier to obtain waivers, but to be honest, the event was not – in my opinion, and I am not a rabid GoW3 fan – worth waiting what for some people would have been over three hours in line to experience – and by the time we left there had been an estimated 500 people through the gate. Perhaps the chance to play the game at the end of one’s “service tour” was reward enough for those who waited, or getting your picture taken in front of a green screen with one of the weapon replicas, with the printed result showing you in a Gears of War scene, but I was hoping for a more engaging experience.

Once people made it past the front gate, they were then held in another area where they were put in groups of 5.  The “troops” were then led out into camp area, which was supposed to resemble (we were told earlier by a representative from Mosaic [3]). There were three different stations – the Locust Meat Market, where samples of barbequed “locust” meat were handed out. Next to it was the Cog Ink shop, where attendees could get an airbrushed temporary Cog tattoo. The final station was a Lancer Art display, where chainsaw artists were carving the Cog symbol from log sections. Once you were done touring the stations, it was off to another line-up where you could work your way onto The Barge, where you got play Gears of War 3 on a big screen. Before exiting the camp, as I mentioned above, you could have yourself injected into a Gears of War 3 scene via green screen photography.

You can check out the rest of our photos from the Launch Event on our Facebook page [4].